Despite the smell of roast chicken and roast pork when you stroll through the Oktoberfest, the Wiesn has also developed into a meat-free paradise in recent years. Not only is the demand for vegan and vegetarian cuisine growing, but the supply has also increased in recent years and there is an ever greater variety of choice. In the following we present a selection of vegan and vegetarian delicacies:

Obatzda, radish and a Wiesn-Brezn or a cheese platter are suitable as starters. 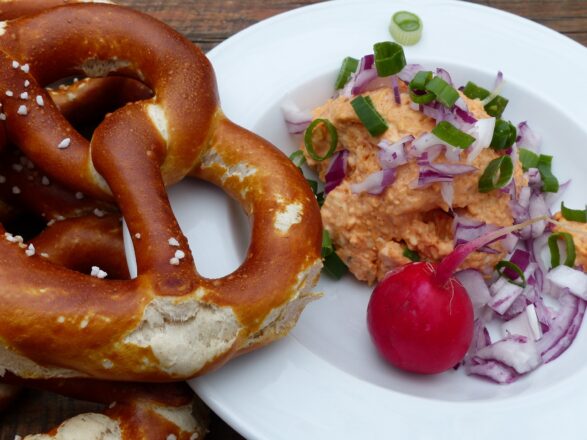 The most famous and oldest vegetarian main courses, which have been available for years, are probably the Allgäuer cheese spaetzle or bread dumplings with mushroom cream sauce, which are probably available in almost every tent. In the Winzerer Fähndl, chef Andreas Geitl served several vegetarian dishes in 2019, such as cheese-herb noodles with melted brown onions, spinach-ricotta pasta with tomato-orange sauce, rocket salad and parmesan as well as creamed mushrooms with pretzel dumplings. 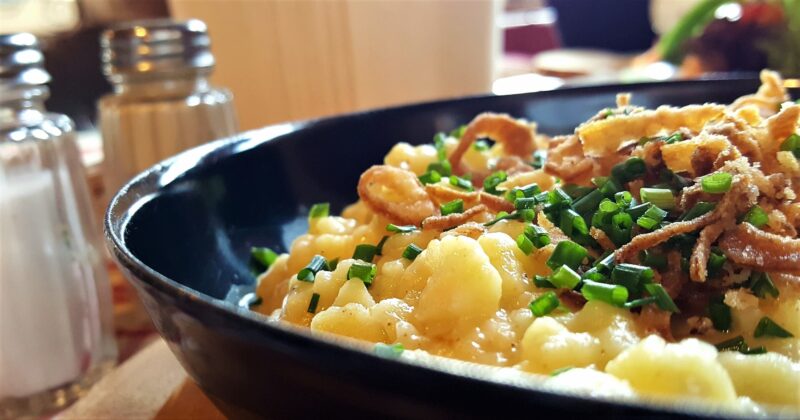 In the Löwenbräu tent, for example, roasted potato dumplings (German: “Schupfnudeln”) on sourcrout (German: “sauerkraut”) were served. Many other tents such as the Armbrustschützenzelt, Käfer’s Wiesn-Schänke, Hacker-Festzelt or Hofbräu-Festzelt also offer a range of meatless alternatives such as a vegetable strudel with cream chanterelles and parsley potatoes, ricotta spinach napkin dumplings or linguini in truffle cream sauce. The Ochsenbraterei, whose name would suggest otherwise, also offers vegetarian alternatives such as organic beetroot mix with potatoes and green sauce.

Of course there is also a selection of delicious vegan dishes. Pumpkin or potato soups with ginger and lemongrass or a vegan organic pumpkin spread on organic wood-fired bread are suitable as starters. Schupfnudeln on sauerkraut are also considered vegan. Further alternatives were available in 2019, for example in the Herzkasperl tent, which served celery schnitzel with potato lamb’s lettuce or
soy medallions served in dark beer-onion sauce with potato dumplings and apple red cabbage In the marquee there were, among other things, potatoes with beetroot filling, horseradish pesto.

During the tour through the Oktoberfest festival area

Meatless alternatives such as burgers with vegan meatloaf, vegetable vegetable rolls or vegetarian baguettes can also be found at the snack stands. In front of the Ochsenbraterei, for example, there is the Feinkost Anthuber food stall, which offers a large selection of vegetarian and vegan specialties such as vegan “Alp burgers” (German: “Alpenburger”) last year. In addition, baked potatoes or tasty French fries can be bought on many corners.

For a sweet dessert you can try roasted almonds or chocolate fruits, for vegans in dark chocolate coating. In the tents, vegetarians can also buy sugared pancakes with raisins (German: “Kaiserschmarrn”) or apple strudel or potato pancakes (German: “Reiberdatschi”) with apple sauce, in some cases these dishes are also vegan. 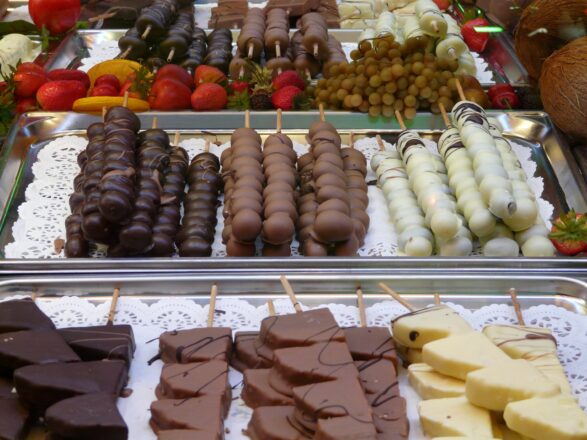 Are beer and wine vegan?

Thank God beer is vegan thanks to the German purity law. Wine, however, is not always vegan. This is due to animal clarifiers which are often used in conventional wines to remove clouding substances from them. Here should be inquired more exactly.

The Oktoberfest offers a large selection of vegan and vegetarian dishes, everyone can find his or her favourite dish here. If you are still looking for a table reservation for 2022, you will find a wide range of table reservations at different times of day in our online shop. Do not miss the Wiesn and its culinary offers!