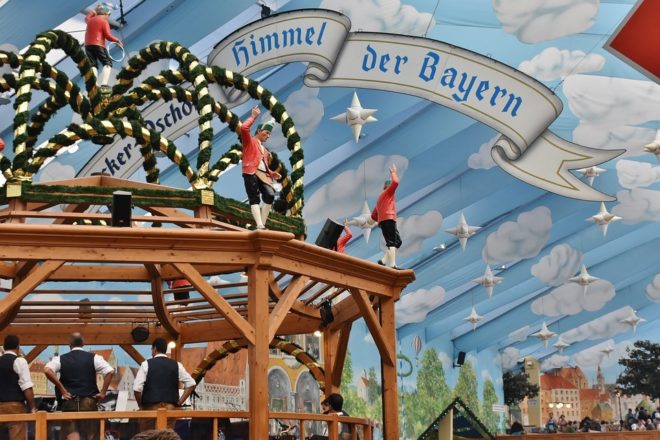 Exceptional circumstances prevail in the Bavarian state capital when the Munich Oktoberfest starts. The Wiesn dominates life in the city for 14 days from the end of September until beginning October. Visitors from all over the world celebrate this great beer festival together with the locals. As soon as the mayor punctures the first barrel on the 1 Wiesn Saturday at exactly noon with the famous words “O´zapft is”, the festival starts. But guests don’t only drinks lots and lots of beer at this time: they are also spoilt with delicious Oktoberfest delicacies.

Taste has a tradition on the Wiesn!

Famous and traditional Bavarian specialities can be found in most of the more than ten festival tents. Many of the innkeepers have been known for their dishes for decades. At the Ochsenbraterei (ox grill), for example, they roast an ox on the spit every day. The tender meat is a rare treat. Cafe Kaiserschmarrn has sweet temptations and the humble dumpling is the main protagonist in the tent named “Knödelei” (dumpling palace). Everyone will find food that they like at the Munich Oktoberfest.

These are the most popular Oktoberfest delicacies

„Reiberdatschi“ – Meatless happiness on the Wiesn 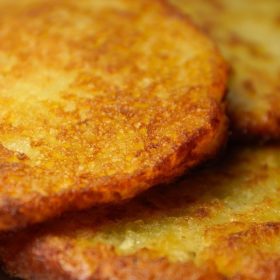 If you prefer a vegetarian meal at the Munich Oktoberfest, you won’t be able to avoid “Reiberdatschi”. What is known outside Bavaria as a grated cake, a potato pancake or a type of rösti, is a real winner on the Wiesn. Genuine Bavarian Reiberdatschi are made from grated raw potatoes, fresh eggs, and some spices fried in butter-fat or oil.  Read more about this on Alfons Schuhbeck’s website. The versatile “Datschi” can be eaten sweet with apple sauce and cinnamon, as well as savoury with sauerkraut and sour cream. You can recognise the stalls where this dish is sold from a distance. The irresistible fragrance pulls people in. Depending on the offer a maximum of three Reiberdatschi are usually served on a plate. Hot and crispy, they arrive at the guest, who only has to decide whether to enjoy them sweet or spicy. Some gourmets eat this simple potato dish on its won, without additional side dishes. Different stands on the festival grounds offer this potato speciality, fried golden brown in fat. Many Munichers make use of this opportunity and try their luck at several Datschi suppliers in these two weeks. There are no limits to the imagination during their preparation. You can stick to the traditional recipe, but experiments with cheese, vegetables and bacon taste delicious as well. A cold beer fits perfectly!

One of the most popular Oktoberfest delicacies is without doubt the barbecued chicken. This crisp, piquant speciality is offered in almost every beer tent. You can find this dish under the name “Halbes Hendl” on the menus. Grilled chicken matches the light Bavarian beer perfectly and is a good basis if you happen to overdo the beer thing a bit. The chicken meat is tender and juicy and wrapped in a crisp crust on the outside. Traditionally the chickens are filled with a small portion of fresh parsley before they are put on the grill. This gives the dish an unmistakable flavour. The chicken is normally accompanied by a large pretzel and a measure of beer. Many people also order Bavarian potato salad or coleslaw as a side dish. It’s been possible to order organic chicken on the Wiesn for some years now. It is somehwat more expensive, but prepared in exactly the same way as chickens that were reared conventionally.

„Fish-on-a-stick“: The treat from Bavarian waters

Another culinary highlight on the Wiesn is the fish-on-a-stick. The “Fischer-Vroni” tent is particularly famous for this. The fish, which also come from Bavarian waters, are strongly spiced, put on a wooden stick and grilled over an open fire. Hardly anyone can resist this. It is a rustic dish that is consumed directly from the wrapping paper with a small wooden fork. The fish has been prepared like this for more than a 100 years. A special feature is that it’s crisp on the outside of the skin and very juicy on the inside. Mackerel is best suited for this, as it’s a bit fatter and has a lot of taste. Especially in the last two decades, however, more elegant fish has also been used for fish-on-a stick, such as salmon trout and brook trout. Connoiseurs eat only a piece of pretzel with it – it doesn’t need more.

To mention another vegetarian Oktoberfest speciality: Käsespätzle. Cheese noodles. This is a really simple but nutritious dish from the region of the Alps. Käsespätzle was known in Austria as well as in the Allgäu region, even though the recipe differs a bit from region to region. The Spätzle are offered in the traditional manner at the stands on the Wiesn: the button-like delicacies are made from a flour-and-egg pastry dough, boiled briefly in salt water, mixed with strong cheese and lastly sprinkled with roast onions as a garnish. The cheese noodles taste best like this. It’s important to use really strong cheese! Middle-aged mountain cheese is wonderfully suitable, but a nice Emmentaler would not be wrong either! Very often cool white wine is also sold as an accompaniment at the stalls. The fine tartness of the wine combines really, really well with the strong cheese. If you’d rather stick to beer, a top-fermented wheat beer is recommended. 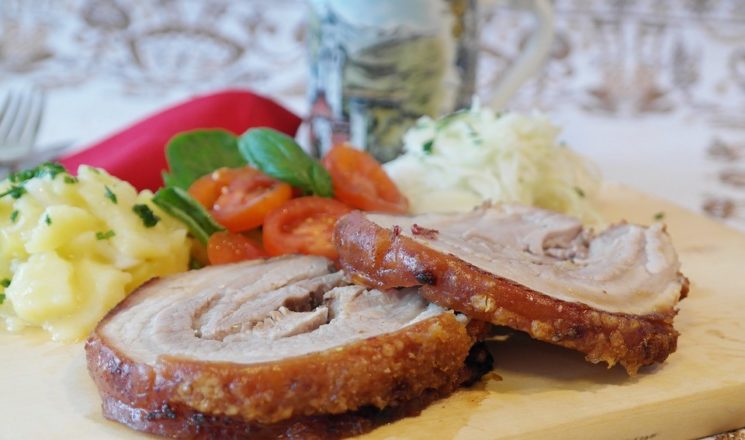 Last but not least we have the traditional Bavarian pork roast. This speciality is served in all the big festival tents. There is actually not much room for experimenting, because the guests want the roast pork exactly like it’s done in Bavaria: with potato dumplings, sauerkraut and, of course, a lot of gravy. The only exception that one can recommend with a clear consicence is exchanging the potato dumplings for bread dumplings. Many locals go on an excursion to the festival field on the Wiesn Sundays to eat roast pork with their families. The Bavarian traditions can be enjoyed in special style at lunch time, accompanied by regional brass music in the beer tents. Whether the meat is served with crackling or without is left to the cook’s preferences. Both are a great pleasure with a measure of beer.

The Munich Oktoberfest in your kitchen

You’ll find all this and much more at the Munich Oktoberfest 2022. If you don‘t want to wait until the Oktoberfest, you can also cook all the dishes at home and enjoy a delicious beer with them.

Numerous recipes for Bavarian delicacies can be found online! A Bavarian beer measure is indispensable for transforming your local kitchen into a Bavarian tavern.