Table reservations for the Oktoberfest 2022: Frequently asked questions and answers

In our frequently asked questions section, you can get the lowdown on everything you need to know about your Oktoberfest table reservation as well as how to enjoy a stress-free visit to the Oktoberfest. Here you can find out when the Oktoberfest 2022 opens its doors, which mode of transport to take to the event and details on the process of making a table reservation. Any other questions? If so, our team are happy to help by telephone oder email!

The “Wiesn”: What is the Oktoberfest?

The Munich Oktoberfest is the world’s largest “Volksfest”, which means something along the lines of beer festival and funfair. The event is held every year on the Bavarian capital’s Theresienwiese, or “Wiesn” for short. Every year, the festival begins on the third Saturday in September and offers two weeks of beer tents with musical entertainment, fairground rides and lots of Oktoberfest stands. The event is traditionally opened on the first Saturday with a celebratory procession of the beer tent proprietors followed by the tapping of the first cask by the Lord Mayor of Munich in the Schottenhamel beer tent. He calls out the famous words “O’zapft is!” at 12 noon, signaling the moment at which beer can start to be served across the entire festival.

This year is the 187th Oktoberfest and it is being held from September 17th through October 3rd, 2022.

The beer tents are open on Monday to Friday from 10 AM until 11:30 PM – with the last beer served at 10:30 PM. On Saturdays and Sundays, beer can be served from 9 AM. There are a couple of exceptions, such as Kufflers Weinzelt and Käfer Wiesn-Schänke, which are open until 1 AM every day with the last drinks served at 12:30 AM.

The funfair is open from Sunday to Thursday from 10 AM until 11:30 PM, and until midnight on Fridays and Saturdays. It is also worth noting that the Oktoberfest funfair opens its doors as soon as the first cask has been tapped at 12 noon on the first Saturday of the festival.

On the opening day, revelers can enjoy the food and shopping stands here from 10 AM onwards. The festival stands are open from Monday to Thursday from 10 AM until 11:30 PM and on Sundays from 9 AM in the morning. They are open until midnight on Friday and Saturday, from 10 AM on Fridays and from 9 AM on Saturdays.

How much does a liter of beer cost at the Oktoberfest?

How much does admittance to the “Oide Wiesn” section of the Oktoberfest cost?

For just three euros, Oktoberfest visitors can visit the nostalgic “Oide Wiesn” – a section of the festival give people a taste of the Oktoberfest of old. Located in the south of the Theresienwiese, there are two traditional beer tents here (“Festzelt Tradition” and “Herzkasperl-Festzelt”) as well as historical fairground rides (one euro per ride) and a museum tent with lots of fairground fun from yesteryear. A fantastic experience for all the family!

Children in the beer tent: What is the minimum age requirement for admittance to a tent at the Oktoberfest?

Children under the age of six are only permitted in the beer tents until 8 PM, even with guardians. For the safety of the youngest Oktoberfest guests, pushchairs and prams are not permitted on German Reunification Day (October 3) as well as all day on Saturday and from 6 PM onwards on every other day.

Which beer tents are there at the Oktoberfest?

Every year, the following 14 large beer tents open their doors to Oktoberfest visitors:

You can get a detailed description of each beer tent including the highlights, the food served there, the type of beer on tap as well as the musical soundtrack to the experience in our „Oktoberfest Tents“ section. 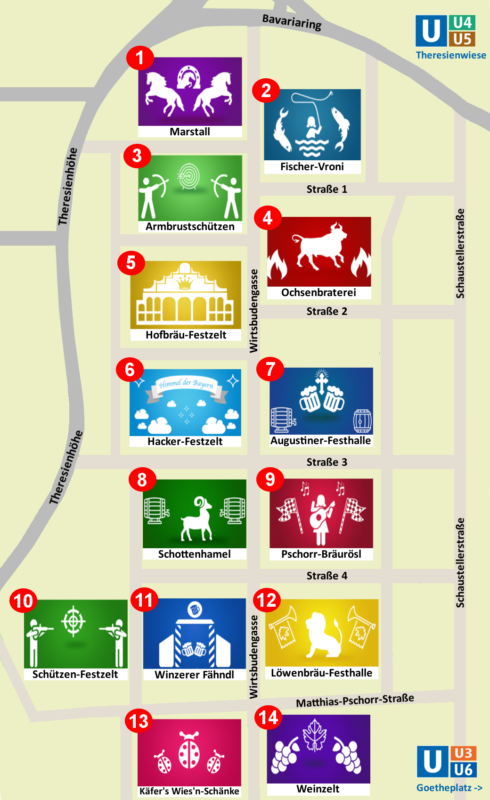 Accommodation, parking, public transport: What are the best options for travelling to the event and accommodation near the Oktoberfest in Munich?

Where’s the best place to park for the Oktoberfest?

Due to the large volume of traffic during the Oktoberfest in Munich, we recommend taking public transport if you don’t live locally. By changing onto local public transport at one of the transport hubs offered by the MVV, many of which are located close to the motorway, you can travel to the beer fest quickly and easily without having to look for a parking space in town. If you are driving all the way into Munich itself, the best option is to park at one of the P+R sites on the edge of the city from where you can take the U-Bahn the rest of the way to the Oktoberfest. You can get all the information on these park-and-ride sites and transport hubs in our „Travel“ section.

How can I travel to and from the Oktoberfest in Munich via public transport?

There are numerous public transport options available, saving you the hunt for a parking space or expensive parking fees at the Oktoberfest:

By the way: The Theresienwiese is also easily accessible on foot from Munich central station!

Which hotels and accommodation offer good-value options during the Oktoberfest?

If you’re looking for good-value accommodation, the main thing is to start looking as early as possible. If you check for rooms in good time, you have the best chances of finding a hotel or accommodation which matches your expectations.

If, in contrast, you make a spontaneous decision to attend the Oktoberfest, you have to expect accommodation in Munich to be pretty pricey. We therefore recommend booking accommodation in the surrounding region in cases like this and travelling to the festival using the extensive public transport network.

Making a table reservation for the Oktoberfest in Munich

Entering a beer tent without a reservation: Do you need a table reservation for the Oktoberfest?

It goes without saying that it is not obligatory to have a table reservation for the Oktoberfest. However, it is certainly a sensible option, not least as many of the tents can fill the majority of their seating with reservations. It becomes more difficult to find a seat without a reservation, and indeed almost impossible on the popular weekends and evenings. By making a table reservation, you avoid the heated competition for those popular free spots, you are able to enter through an exclusive reservation entrance directly into the beer tent without waiting around at the public entrances, and you’re able to sit together as a group at one table.

How can I reserve a table at the Oktoberfest?

You can call us on +49 89 231414718 to book any of the reservations on offer. You can also place an order via email to info@tischreservierung-oktoberfest.de as well as in our online shop.

You can place an order in our online shop as follows:

Select your desired reservation option in our online shop and place it in your personal shopping cart. By pressing the “Buy” button, you are submitting a binding offer for concluding a purchase agreement. You can now pay directly by credit card or PayPal, or via invoice if you’d prefer. You will receive our confirmation and invoice within 24 hours by email. A binding purchase agreement is only concluded when you receive this confirmation email.

Which services are included in the price of a table reservation?

Is the table reservation valid for an entire day?

The start and end time of your table reservation varies depending on the beer tent you book. Afternoon reservations apply from around 11:30 AM until 4 PM, while evening reservations last from 4:30 PM until 10:30 PM. Please check the exact times in your detailed reservation documentation. Please adhere to the reservation periods booked – otherwise the tent proprietors reserve the right to give your reserved places to somebody else.

How many people can sit at a reserved table in the beer tent?

A table reservation includes seating for ten people. However, some tents also offer tables for eight or 20 people. The exact number of seats is always stated in the detailed offer descriptions in our online shop. If you make reservations for 20 or more people, all the tables will be located next to one another. By the way, we also offer reservation options for two, four, six or eight people. These offers are located in the “small group” section in our online shop.

Can tables be reserved in a specific part of the tent?

It goes without saying that for a small additional fee you can also reserve tables in a specific part of the tent – an option which you can select directly within our online shop. In the large beer tents, the following areas are usually available:

Depending on your customer needs, age and size of the group, we tailor the reservations to your requirements. If your guests want to party without inhibitions, we recommend the middle section. For business or quieter groups, the boxes or gallery are perhaps a better choice. 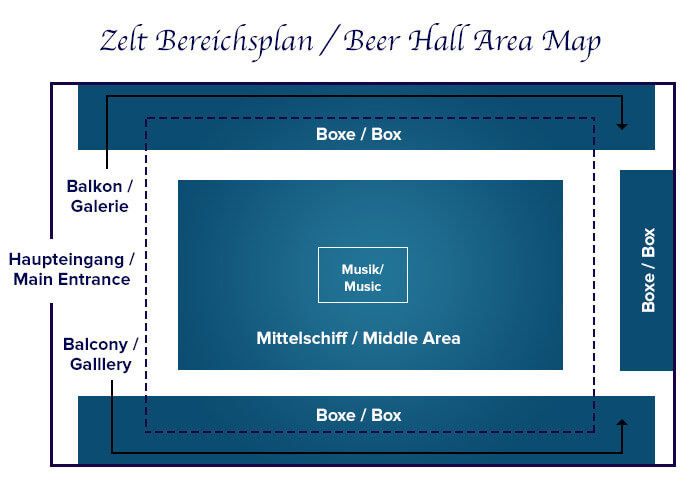 What is the surprise package?

If you book the surprise package, you select the date and time of your table reservation (afternoon or evening). However, you are unable to select the beer tent yourself in this package. This flexibility allows us to offer the package at a substantially cheaper price. 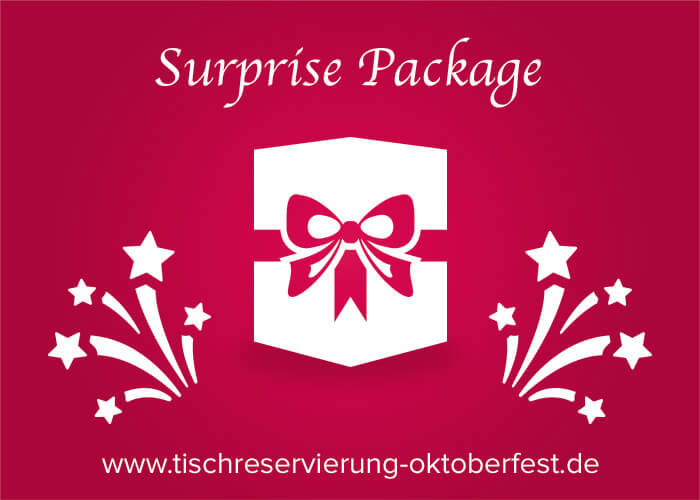 Whether you are looking for a personal shuttle service to the event, a tour of the Oktoberfest or exclusive accommodation, our team is happy to help you find the perfect arrangement to make your Oktoberfest experience truly unforgettable. To find out more, call us on +49 89 231414718 or send us an email at info@tischreservierung-oktoberfest.de. We look forward to putting together the ideal VIP package for you.

How does the payment procedure work?

We accept payments via PayPal, debit, credit card or a normal bank transfer. The credit card payment is also handled via PayPal.
We also accept the processing of the payment via a lawyer as a trustee. You also receive an invoice from us with VAT included at a rate of 19% on the overall amount, which we are also able to address to your business as required. By the way, all prices listed in our online shop are gross prices.

All orders have to be paid for within seven working days after we send our invoice. Your booking is only binding after payment is received. If you would like to pay by PayPal, debit or credit card, please pay directly within the online shop.

When and how are the reservation documents sent to me?

You will typically receive all of the required documents for your table reservation by the 5-10 day before the event will starting. The reservation documents can however be delivered directly to your hotel address in Munich on request. In an effort to ensure the secure shipping of your documents, we work closely with our shipping partners DHL Express, GO Express and UPS. If your documents are lost in the post, despite the utmost care on our part, it goes without saying that we accept full liability and guarantee you a replacement reservation free of charge.

If you should have any more questions, please call us on +49 89 231414718 or email us at info@tischreservierung-oktoberfest.de.

IWhen will the Oktoberfest take place in 2021?

This year’s 187th Oktoberfest takes place from 18 September to 03 October 2021 on the Theresienwiese (Wiesn).

Can tables be reserved for the largest beer tents or do you need a table reservation at the Oktoberfest?

Tables can be reserved for the 14 largest marquees. A table reservation for the Oktoberfest is not mandatory. However, it does make sense, as the Wiesn hosts are allowed to reserve most of the seats in the marquees: without a reservation, it is difficult to get a seat – and almost impossible in the evenings and on the busy weekends.

What are the opening hours of the beer tents?

Which are the largest tents at the Oktoberfest?