If you stroll through the Oktoberfest area, you have the feeling that all this is not environmentally friendly: Carousels spin around and shine to music in bright colors, beer mugs are washed, roasted chicken is grilled. Without electricity, water, and natural gas, nothing would run at the Oktoberfest.

Can such an excess be environmentally friendly?

Behind the scenes, the hosts and showmen have to fill a thick catalog with environmental requirements. Thanks to a sophisticated eco-concept, the Oktoberfest is more environmentally friendly than almost any other large-scale event. As early as 1997, it even received the “Environmental Oscar” of the Federal Ministry of Economics and Technology for this, and to this day some things have developed positively since then. 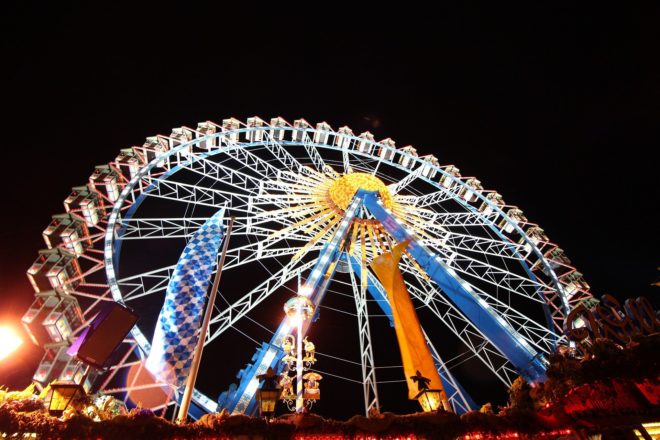 Water recycling for a sustainable Wiesn

Water has been saved on the Wiesn since 1998: In seven beer tents, the rinsing water from the beer mug dishwashers is not fed into the sewer but used for the toilets. These are the tents: Pschorr Bräurosl, Hacker Festzelt, Hofbräu Festzelt, Löwenbräu Festzelt, Marstall Festzelt, Schottenhamel Festhalle, and Paulaner Festzelt as well as the chicken roasting tents “Zum Stiftl”, “Poschner’s” and “Goldener Hahn” (2018).

Also, operators wishing to open a stand at the Oktoberfest must present a 13-point plan to the city government that also includes environmental friendliness. Since the competition on the festival grounds is intense, they are in principle forced to implement some points on sustainability and environmental protection.

Wiesn is a power guzzler – a little better with green electricity

Three million kWh of electricity are needed every year – enough to supply 1200 households in Munich with electricity for one year. But since the year 2000, public areas of the Oktoberfest have been operated with green electricity and all catering establishments now purchase eco gas. In this way, 1,000 tons of CO2 can be saved annually.

Two Wiesn hosts as organic pioneers: chicken and duck roastery Ammer and the Herzkasperlzelt on the “Oide Wiesn”

The chicken and duck roastery Ammer, since 1885 on the Wiesn, has already converted almost all dishes to organic in the year 2000. Only the duck has not yet been converted to organic, as according to the tent host there is no optimal organic replacement yet.

Other measures such as a solar system on the roof, bio-hydraulic oil in the forklifts and hot water preparation in the chicken ovens complete the sustainability concept of the tent.

The Herzkasperlzelt (engl. “heart clown tent”) on the “Oide Wiesn” has only been in operation since 2010. For them, plastic avoidance, in particular, has top priority. For example, they try to rely on suppliers who do not pack every head of lettuce with plastic but instead deliver it in reusable boxes, for example. There is also a delicacy for vegans because seven vegan dishes are on the menu. There are also organic chicken, but one costs 18.80 euros.

Due to the ban on plastic dishes and cans, “only” 1000 tons of rubbish are produced on the Wiesn every year. Besides, there are 450 tons of food leftovers such as chicken bones, potato salad, and salad garnish. In 1991 9000 tons of garbage were produced.

It’s not surprising that the Wiesn is always so clean in the morning: every night at least 30 hard-working workers from the Munich Waste Management Company (AWM) and the street cleaning department make sure of this. The garbage has to be collected from the ground because there are no garbage cans on the Wiesn. Because these were abolished after the Oktoberfest bomb attack of 1980, moreover it is more timesaving than emptying each garbage basket individually.

Tip for even more environmental protection when arriving from the city area of Munich: Simply use three-wheeled rickshaws instead of taxis and let them drive to the Oktoberfest. In many cases, the bicycle taxis are only operated with the driver’s muscle power. During the Oktoberfest, there are about 200 of them all over Munich.

Also, worth a visit for the environmentally conscious