In Munich and the surrounding area, it has always been a matter of good manners to invite colleagues and business partners to the Oktoberfest. Companies invite their customers, departments go closed to the Oktoberfest. Therefore, every year a large part of the reserved seats at the Oktoberfest are booked by companies. But which Wiesn tent you should best choose depends entirely on the company and its preferences. On the Wiesn there are 14 large beer tents, three more on the Oide Wiesn and an even a larger number of small tents. For example, a dynamic small start-up will feel more at home in the Schottenhamel tent, while the large car rental company SIXT chooses the Schützen tent for the annual “Damenwiesn” (Wiesn for women).

In Schottenhamel, the official opening of the Oktoberfest takes place by the Munich mayor tapping the first barrel of beer. As early as 1950, the Wiesn was first tapped with a loud “O’zapft is”. According to legend the then Mayor Thomas Wimmer was quite in a hurry because he had to open a fair at Theresienhöhe shortly before 12 noon. Since it was raining like rain from buckets and he simply wanted to take the shortest way into a tent, he came into the Schottenhamel tent. Whether it really happened that way is, however, not sufficiently proven. Today about 9,000 people fit into the Schottenhamel festival hall with beer garden. The tent is particularly popular among Munich’s youth – the relaxed atmosphere means that start-ups are often to be found here. In addition, the beer tables and benches are set up differently than in the other beer tents: You not only sit opposite each other at the classic beer set, but also around the corner. This increases the communication possibilities and new contacts can be made quickly.
The Hacker or Schützen tent is also suitable for young audiences and start-ups. The second one is also known for its south-facing balcony, which is considered the most beautiful of the whole Wiesn.

Munich companies and clubs in particular reserve the Ochsenbraterei every year as a classic regulars’ table tent. Here you can enjoy delicious food in peace and quiet and have conversations, because Wiesn tourists in party mood are more likely to be found in other tents. 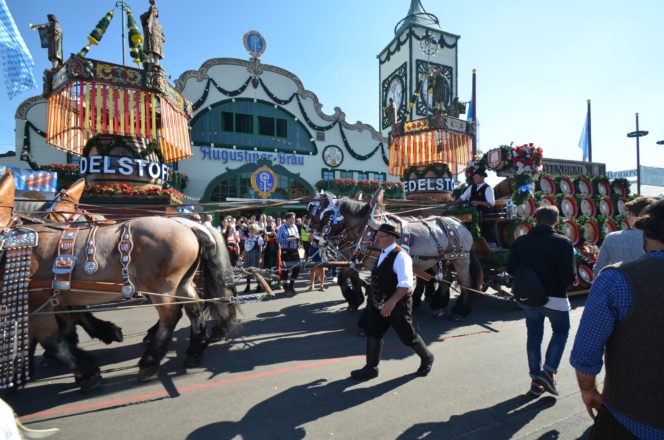 For customers or international business partners from far away

Would you like to invite customers or business partners who have never been to the Oktoberfest? Or are you a company that does not come from Munich and the surrounding area? The Augustiner tent, which also plays the most traditional music, is considered a very solid tent. This tent is particularly suitable for business partners who are visiting the Oktoberfest for the first time. It is one of the oldest tents and the Bavarian atmosphere and tradition can be enjoyed especially there.
Also the “Oide Wiesn” is a great place to experience Bavarian culture and a bit of nostalgia. There are daily traditional costume parades of different costume associations offered. The tents on the “Oide Wiesn” are considered particularly social. 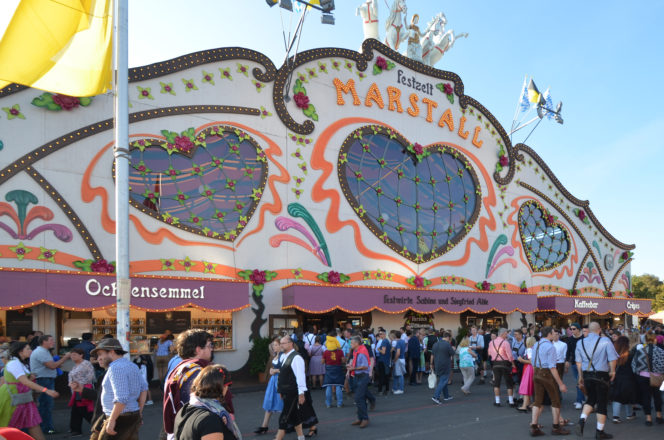 The Marstall tent (former: Hippodrom) directly at the main entrance is a celebrity tent. Käfer’s Wiesnschänke is even more exclusive. In addition to the Wiesn-Maß, there you can also buy wine and champagne.

These companies are showing the way

The Oktoberfest is particularly popular for banks, insurance companies, automobile companies and suppliers. This is confirmed by the landlords: “During the week, 80 percent of our tables are booked by business people,” says Angela Ofenstein, head of the Hofbräu Wiesnbüro, speaking of continuously growing demand.

Regine Sixt once again invites more than 1,000 hand-picked powerwomen to her traditional “Damenwiesn”.

After a two-year break, Regine Sixt (co-responsible for the international marketing of Sixt Car Rental) organized her “Regines Damenwiesn” again last year and collects with her foundation “Tränchen Trocknen” for children in poverty. In the Marstall tent she meets international business partners – thus her network is one of the largest and most famous women’s networks worldwide after more than 20 years of history. In the Octoberfest atmosphere, the women also shared their professional experiences.
Today, Sixt is one of the leading mobility service providers worldwide with a presence in more than 110 countries. Mrs. Sixt continues to drive international expansion with her events, among other things. She has been instrumental in building the company to its current size.

Many investment companies also invite employees and customers to Munich at the end of September and combine the pleasant with the useful.

Bits & Pretzels is an event that takes place during the Oktoberfest. With lectures by well-known personalities from politics, media and economy. Especially for founders and those interested in start-ups. On the last day of the event, the participants meet at the Oktoberfest in the Schottenhammel tent to network and exchange information about the lectures held.

Which tent will you choose?

It is not clearly possible to make a clear recommendation for a tent where you should present yourself with your company, because all tents are very different and have various advantages and disadvantages. But no matter which tent you choose, the most important thing is a table reservation, because it is no fun to wander around the Oktoberfest with customers for hours looking for a place. Read our Business Wiesn etiquette guide and use the Wiesn as a true career booster!