After Wiesn: Until dawn

An influx of people from all over the world is arriving Munich. People are standing at the station and waiting for their connection to the Theresienwiese. Months before, a separate „tent city“ was erected under the watchful eyes of the Bavaria. Exceptional circumstances prevail in the Bavarian state capital for around two weeks from middle September. It’s not only at the festival grounds that people are working hard: all over the city houses are decked out in blue and white flags as well!
Around 6 million people frolic at Munich’s Oktoberfest every year, making it the largest folk festival in the world. Visitors to the Wiesn will be spoiled for culinary treats in the 14 large tents and the pub city of Munich’s Oktoberfest: the classics, such as pretzels, white sausages, pork knuckle and Obatzta with radishes (Radi), are of course not to be missed. And real beer mug Rambos – also known as waiters – bring you freshly tapped tasty beer for your thirst. Provided you can still get hold of one of the coveted places in the festive tent

If you don’t manage to get in in the late morning or afternoon, the tent has fallen victim to over-flowing. On the other hand, it is often only possible to get in by making a table reservation beforehand.

Celebrities meet up in the Käferzelt (Beetle Tent) or wine tent on their annual visit to the Oktoberfest. Festive Oktoberfest visitors get their money’s worth in these two tents, because these are the only two places with extended opening hours (until one in the morning, with bars closing half an hour before that).

After Wiesn: the night-time excursion continues 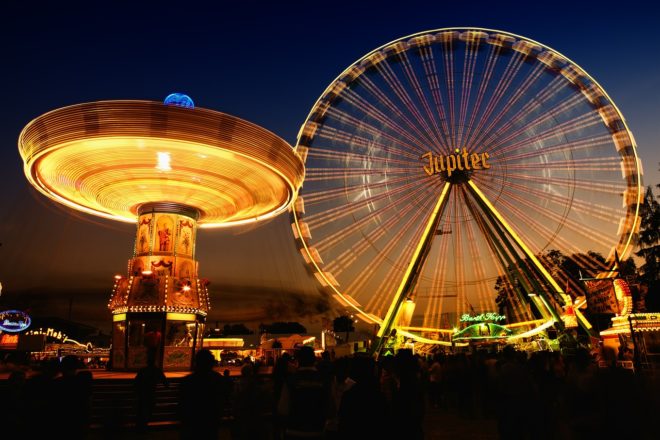 At some stage the lights go out. The last Olympia Looping ride is over. The last draught is tapped. The last gingerbread heart is handed to the sweetheart.
When even the Devil’s Wheel goes off work, the visitor has only two options: to succumb to his alcohol- and celebration-induced fatigue and to pass out, or simply to continue celebrating in one of Munich’s numerous pubs.

Get on the bus, please: directly to your favourite club with the Party Bus!

The „Club and Line“ party bus is already waiting for after-Wiesn revellers at Schwanthaler Street, so get out of the tent and onto the bus. The ridiculous fare of 10 euro includes the ride and one free drink already!  The party bus stops at numerous pubs between the Wiesn and the former cult factory. The route to your favourite club is best bridged at the 6m-long counter, to the sounds of a DJ. Thanks to the bus ticket, entrance to many of the After-Wiesn clubs is free.

“Fresh mountain air” in the Löwenbräukeller

Many visitors would love to take a bit of the traditional festival with, even after the final hour on the Wiesn. Yet, there are hardly any clubs that are as close to the original Volksfest as the Wiesnzelt at the Stiglmaierplatz in the Löwenbräukeller.
Night owls and nostalgics will get their money’s worth in this After-Wiesn location, which offers a unique mix of club area and live hall. “This is Oktoberfest by night!” visitors of all age classes, who enjoy the band Bergluft in the Bennosaal, rave.
As in the case of the bigger model, you should also reserve seats for the Oktoberfest in the Stiglmaierplatz in time. Entry to the Wiesnzelt Clubbing ist 10 €. You’d be very lucky to still get an After-Wiesn reservation at the box office. While the legendary Wiesn hits in the Benno hall invite people to join arms and sway to the music long after midnight,  a cheerful House Party gets under way in the three adjoining venues.

Entrance is from 18h30, Thursdays from 19h30. It starts one day before the official start of the Oktoberfest on the Friday.

How to get there: from the Theresienwiese with the U4/U5 (Nymphenburger Street)

If you wouldn’t like to lose out on either, you can book the VIP package for € 148.75. In addition to a 3-course menu (bread board, extra-baked gingerbread heart, caramelised pancake with raisins, 2 measures freshly tapped Oktoberfest beer) it also includes entry to the Wiesnzelt Clubbing.

From the festival tent directly to the renowned Wiesn Club

If the distance between the festival grounds and the city is just too much for you, the Wiesn Club is probably the right place to start. It is located directly behind the Bavaria in the Old Congress Hall. Visitors are fired up on disco and electro beats in two venues from 10pm until the early hours of the morning. If you’ve had enough of beer, you can change over to the bubbly stuff in the exclusive champagne bar.
Due to the proximity to the beer tents of the Munich Oktoberfest, visitors also line up very fast. If you want to end your Oktoberfest visit to the Wiesnclub without standing in a long queue, you should leave your beer table in the festival tent relatively quickly.

It is almost impossible for partygoers in Munich not to find a good after Wiesn clubbing location. Even those who don‘t know the top addresses are automatically swept along with the party crowd to the next party.
By the way: If visitors come in costume, they are rewarded with free admission and drinks specials at many of the clubs!